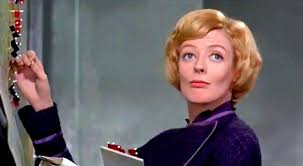 Muriel Spark’s 1961 novel The Prime of Miss Jean Brodie introduced my favourite teacher (although I first read it twenty years later). When, in the late ‘80s, I trained to follow in her footsteps, she was not ‘in vogue’ and she has not been since. But, on each occasion that I re-read the book or watch Maggie Smith bring her to life in the 1969 film, I feel – more and more – that she had the right idea: a teacher should inspire a group of pupils to want to learn, to want to succeed and, therefore, the subject taught is irrelevant. We cannot even begin to cover everything in the time we have allocated to us in the classroom so it is best if we share a passion for learning, whatever the subject.  A good teacher can show her charges that they can follow their own interests. But then, just as now, the establishment has the final say.

We call this ‘School Pie’ as it originated as a meal which a lovely teacher friend of mine borrowed from her school cook, even though it has been tweaked a bit since.

I have given metric measures but – if you have both on your scales – the imperial is much simpler.
115g/ 4oz carrot, peeled and chopped into large chunks
115g/ 4oz onion (about 1 large onion), peeled and chopped
115g/ 4oz cheddar cheese, in 3-4 chunks
170g/ 6oz stuffing – make this according to packet instructions
4 slices of bread, toasted and ripped into smaller pieces
Splash of olive oil
2 eggs + yolk of another
200ml/ 7floz milk
2 sheets ready rolled puff pastry (You can make your own or use a block but this is the easiest method) 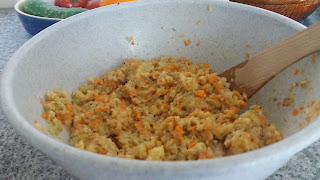 Spread out a sheet of pastry and place half of the mixture inside one half of the pastry.
Fold over the other half of pastry so that the filling is in the centre. Then crimp all the way around. Score the top. 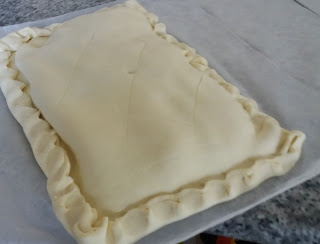 Repeat with the second sheet of pastry.  Freeze one.
Put the other on a baking tray.
Mix the egg yolk with a little water and coat the pastry with it.