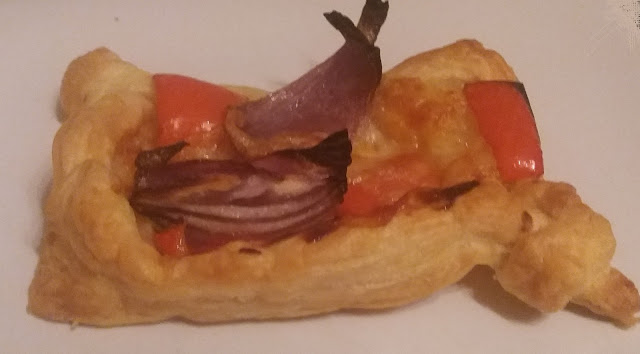 Noel Coward – what a genius! I love Private Lives. I have a CD version and play it whenever I need a boost.
Coward was a playwright, actor, director, author, composer, singer, cabaret performer, etc., etc. His wit was renowned and, although now often parodied, was unique at the time.
Here is his wonderful rendition of Mad Dogs and Englishmen:
And here is (the also wonderful) Neil Hannon’s version of I Went to a Marvellous Party:

In 1935 Coward wrote a short play called Red Peppers which was part of a ten-play cycle known as Tonight at 8:30. He performed in it himself, alongside Gertrude Lawrence. I think that if he came to dinner he might appreciate me cooking something with red peppers as a main ingredient. It would appease his legendary ego.

When choosing my dish, I did wonder at first whether it might be too familiar and not flamboyant enough, but then I thought that Coward was always one to take the obvious and elevate it, so I would serve this – but with champagne!

Actually, with this tart you can’t fail to impress, however ordinary it is.
This is one of the easiest veggie mains you will ever find. Something similar crops up in many cookery books, but this is my even simpler version.
One of the problems that I have found in the past is that the filling makes the pastry soggy. This method should take care of that. 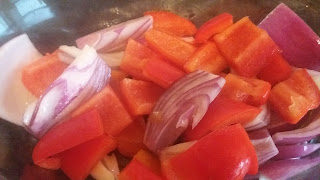 Deseed the red pepper and chop into chunks.

Peel the red onion and cut into wedges.
Place both in an oven proof dish. Coat with the olive oil.
Roast at 200˚C/ Gas 6 for about 15-20 minutes until soft. Keep oven on at same heat.

Meanwhile unroll the puff pastry, retaining the paper. Allow to rest for a few minutes. Then, cut into quarters, doing the same with the baking paper the pastry was wrapped in.

Score along two sides of each rectangle and fold the strips over to the opposite corner.
Then repeat with the other sides. This sounds complicated but it isn’t, and don't try to make it look too 'neat'.

Place each on a paper rectangle and put all four on a baking rack, on top of a baking tray. Heat in same oven as peppers for 5 minutes then remove and allow to cool for a few minutes. 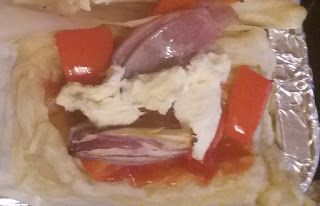 Coat the base of each tart with ketchup and sprinkle with the mixed herbs.
Rinse the mozzarella and allow to dry.
When the peppers and onions are cooked, drain and dry on kitchen paper.

Then, scatter over the tarts making sure you have an even distribution.
Tear the mozzarella into chunks and place it around the onion and pepper.
Heat in the oven for 20-25 minutes until the pastry edges and mozzarella are lightly browned. 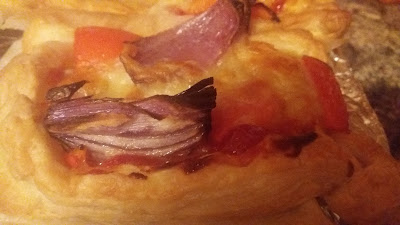 Carefully remove from the paper and serve immediately. 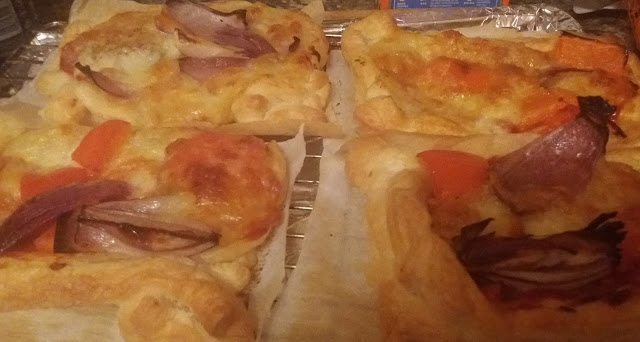